Through the ESG Strategy, we analyse, measure and manage the impacts that we as a company have on society and its environment. The company’s own value creation model, focused on shared management of telecommunications infrastructures, calls for sustainability, efficiency – and therefore responsibility – in the way we use the resources with which we work. Building partnerships with our customers helps to forge long-term links with them, and as we manage the company, we keep an eye on the long cycle, aware of the principles of ethics, good governance, respect for human rights and dialogue with our stakeholders that should govern our performance. 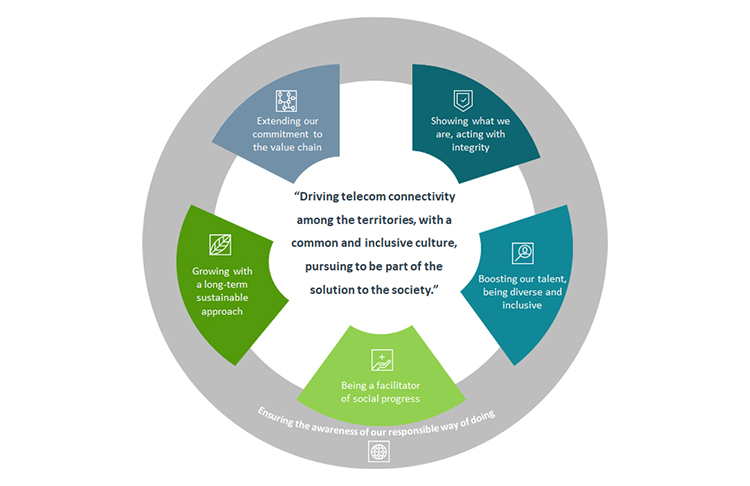 Cellnex’s strategy in this area is formalised in the shape of our ESG Master Plan. This plan comprises all the ethical, environmental and social initiatives, establishing commitments in accordance with internationally recognised standards such as the United Nations Global Compact, which the company joined in 2015, taking on board its principles as an integral part of its ESG programme. Furthermore, the company is part of the MSCI, Sustainalytics, FTSE4GOOD, GRESB, CDP and “Standard Ethics” sustainability indexes.

The aim of this Plan is also to improve two-way dialogue between Cellnex and all the stakeholders, mainly the company’s staff, customers, suppliers, customers, administrations, shareholders,the local community and society in general.

In 2020, the company’s ESG strategy was updated by defining a new ESG Master Plan (2021-2025) at Group level, taking into account the evolution of the company in recent years and its growth and internationalisation process. The ESG diagnosis carried out in the past has been updated to show the company’s current ESG status and new trends and stakeholder expectations.

Likewise, a new materiality analysis was performed for Cellnex at Group level, allowing the company to know which aspects are most relevant to it in the field of ESG.

The strategic axes were defined within the ESG vision as defined and in light of the recommendations identified from the internal and external diagnosis along with the stakeholder’s expectations. Likewise, the analysis of the SDGs and their specific targets and their corresponding objectives were taken into account.

Once the five strategic axes and one cross-cutting communication and awareness-raising axis have been defined, priority will be given to 17 strategic lines that will give rise to 92 specific actions under Cellnex’s new ESG Master Plan. A five-year timetable has been drawn up to ensure the implementation of the ESG Master Plan, including KPIs and objectives to be achieved in some actions.

The ESG Master Plan (2021-2025) is aligned with Sustainable Development Goals. A study conducted in 2020 identified and prioritised the most relevant SDGs and their specific targets for Cellnex and analysed the company’s contribution to their achievement.

These results have been taken into account in the definition of the company’s ESG Master Plan and ESG Policy.

Cellnex performs its activity under effective and transparent corporate governance,promotes ethical behaviour, best practices and fosters a culture of compliance.

In this connection, the company is working to implement and consolidate the best corporate governance practices, covered essentially in the Code of Good Governance for Listed Companies approved by the Spanish National Securities Market Commission in 2015.

Cellnex’s Code of Ethics is the fundamental standard setting the general mandatory guidelines for all persons and stakeholders of the Group covered by it.

The objectives of the Code of Ethics are:

Cellnex makes great efforts to ensure transparency, participating in various sustainability indexes of which it is part:

Cellnex takes part in the Carbon Disclosure Project (CDP), one of the most highly recognised organisations for its work on climate change, which seeks to assess the quality of – and systems for reporting – the information provided by private companies or by the public sector in the sustainability and environment area.

Furthermore, Cellnex has signed up to the CDP Supply Chain programme, which aims to better understand how suppliers are addressing climate change and working to reduce their greenhouse gas emissions.

In November 2015 Cellnex Telecom joined the United Nations Global Compact as an expression of its commitment to including the corporate social responsibility concept into its operational strategy and organisational culture. Each year, the company publishes its COP (Communication of Progress) on the official Global Compact website.

Cellnex is part of the FTSE4Good sustainability index, which recognises the good practices of listed companies in the environmental, social and corporate governance fields.

Cellnex has taken part in the Standard Ethics sustainability index since 2017 and this year was rated “EE-“, as it was in 2017, equivalent to an adequate level for good compliance in governance, sustainability and social responsibility.

Cellnex is evaluated by Sustainalytics, an environmental, social and corporate governance (ESG) research and rating company for investors worldwide.

Cellnex’s better rating on this index contributed to the company being able to renew a € 500 million ‘green’ loan that matures in 2023.

Each year Cellnex participates in the DJSI index as a guest company, obtaining good results and ranking above the industry average in the three areas evaluated: economic, environmental and social.

The Cellnex group has signed up to the United Nations Global Compact as an expression of its commitment to internalising the concept of corporate responsibility. In so doing, it undertakes to promote and spread corporate sustainability policies and practices based on the 10 key principles and the 17 SDGs promoted by the United Nations.

In addition, the Group has a Human Rights policy, applicable to the entire organisation, in which it sets out that Cellnex ensures and is committed to protecting and respecting Human Rights.

Local community and society in general

Furthermore, Cellnex is committed to generating local value by working with local suppliers (more than 90% of the total).

Cellnex is working together with the Third Social Sector Board, through the m4Social Project, on a project in the social housing area by applying sensorisation and connectivity technologies linked to the IoT.

Cellnex in the face of the coronavirus crisis

Right from the outset of the crisis caused by the coronavirus, COVID-19), Cellnex Telecom, as an operator of telecommunications infrastructures for radio and TV (DTT), voice and data, and communication networks for security forces (police and firefighters) and emergencies (medical and maritime rescue), has deployed its contingency and business continuity plans in the countries in which it operates.

Our main goal is to preserve the security and availability of the services we provide 24×7 while ensuring the application of the strictest protection measures for our employees and co-workers.

Furthermore, under the umbrella of the “Cellnex COVID-19 Relief Initiative”, the company maintains several lines of cooperation to the tune of €10 million with NGOs and various hospitals that are helping to minimise the health, economic and social impact derived from the pandemic.